The city and the landscape 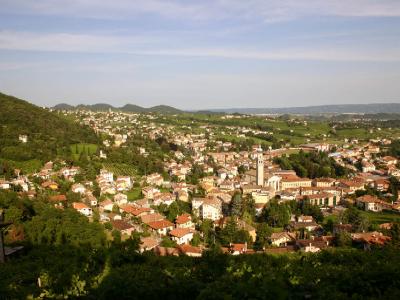 The hills of Superior DOCG wind, in the Marca Trevigiana, a little more than an hour from Venice. They are a long natural amphiteater that opens between Valdobbiadene and Conegliano.
On the north of Trveiso province, not far from the awesome massive of Dolomiti, the traveler, that arrives from the plain, could see a new environmental scenary! Suggestive, with strong distinctive traits, made of steep sloves alternate with gentle declivity, on which dominate the vineyards.

In these lucky lands of the Marca, everything smells of wine and good flavours, of a secular wine culture that has drawn deeply  the landscape and the soul of an area, one of the most beautiful of Italy
People from here love their roots, and have manteined the taste of traditions and the pleasure of hospitality and meeting, together with that one for food and typical products. 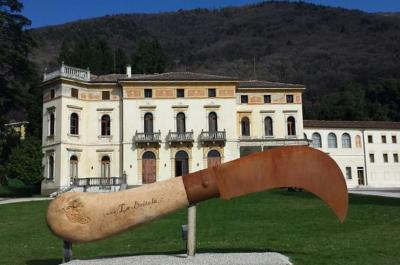 This is a fascinating territory, rich in suggestions and historical and artistic attractions, surprises and proposals. They are often unexpected and almost keep hide because they are  precious. You can find it in the valleys or between the many villages scattered here and there, and where it is pleasant to get lost in search of millenary traces of the human presence and the strong culture of people.

The best way to do it, it is to be guided by the Way of Prosecco and wine of the Hills Conegliano Valdobbiadene, the oldest wine artery of Italy. Nowadays it leads the traveler also through three thematic routes to discover many historical and artistic attractions of the area and of the most prestigious 'cru' (vineyards).

These are lands of ancient castels and monuments, aristocratic villas, sacred buildings and ancient thermal springs.
Conegliano, Vittorio Veneto, Valdobbiadene, Pieve di Soligo each represent a small casket of natural, artistic and architectural treasures to discover. It is important to gather the intimate rhythms of an area of welfare that still pulse on a human scale.

Meanwhile, the grapevines  all around, with secular patience, are waiting for the sun, and assist to the regular alternation of the seasons, of the colours and the flavours.